Dr. Eric Mazur, a famous physics professor from Harvard University, came to SCUPI to deliver a brilliant speech on innovation. 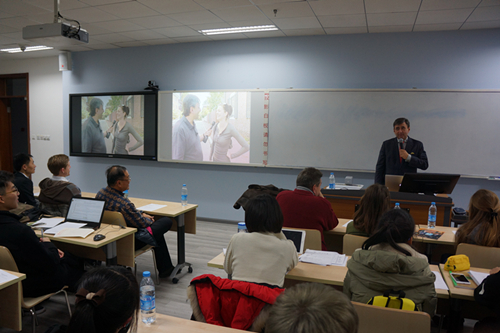 Firstly,Dr. Mazur showed some pictures of our different editions of physics textbook, for example, the elephant sitting on the table exerting an acting force and also receiving a counter-acting force, and the pulley with a monkey and a banana attached to both sides used to explain how a pulley works. Apart from these interesting examples, he also described some unrealistic situations like a frictionless branch from which Dr. Mazur asks the question,  “Has there ever been such a frictionless branch?” The answer, without any doubt, is “no.” And nowadays physics seems to be in an embarrassing situation. On the one hand, sometime it is too idealized to practice in real life. On the other hand, education somehow does not exert a positive effect on physics, making it an ivory tower. Then, the professor explained in detail the reality of the physics. He used a video about street interviews as the introduction, where he showed people the same horizontal projectile motion and collected randomly chosen interviewees’ answers. The question is, “If a running man throws a ball from his hand, will the motion trail be a parabola or a straight line?” The professor from Harvard University gave the same answer that the trail will be a parabola, while those passersby’s answers were that the trail will be a straight line mostly, and the vast majority of their reasons are “I have seen it.” or “My life experience tells me that!” Students in the lecture agreed with Dr. Mazur because the object has an initial horizontal speed, soits trail will be a parabola. This, however, is not true. Prof. Mazur played an experimental video he himself made by himself, wherea running student threw a ball. Amazingly, the ball fell to the ground vertically, so physics’ theory contradicts the reality. The professor concluded that physics education is purely theoretical and lacks a proper connection to reality. As in the problem above, because the initial horizontal speed was not big enough, the expected parabola didn’t appear, and even an object thrown from an airplane’s speed is still not great enough to get the expected parabola. After that, Professor Mazur joked: “When theory is contrary to the reality, then let’s change the reality!”.